Let me introduce you to a dear friend of mine, Mrs. Joyce Mullen. Mrs. Mullen tells a story of her family’s genealogy, and how she, being from Florida, came to realize that when she moved to Middle Tennessee she moved to nearly the exact same place where some of her ancestors once lived.

My husband, Fred Mullen, and I moved to the Water Valley area in 2007. Our son and their family live across the road from us along with my daughter-in-law’s parents in the same area. We call our little section of the valley “Mullenville”…nothing official, just our pet name for it.

When we moved to Tennessee after living for thirty odd years in Florida, I was researching my mother’s side of the family. She was born in Hardeman County, Tn. and I was born in Shelby County (Memphis). The research centered around the Mason family in Rutherford County. That will be a story for another day all dating back to the late 1700’s.

When we moved back to Tennessee we brought my mother and father with us. They were in their nineties, had been from Tennessee originally, and were excited to move back “home”. Shortly after our move I began looking into my father’s family. My dad, Carl Alexander Morris, had been born in Birmingham, Alabama so I had assumed that I would find my ancestors living in that area of the country. Much to my surprise, the trail led right back to Tennessee! Carl’s grandfather on the Morris side, Eli T. Morris II, had been a Tennessee State Senator in the late 1800’s. His mother’s side came from Franklin, Kentucky. She was a Taylor and her line dates back to the American Revolution and shows kinship to George Washington on his brother’s line.

My biggest find was that my father had local ties. His grandmother was Annie Dabney Carl who was born in Leiper’s Fork (then Hillsboro). Do you recall seeing Carl Road that runs off of Southall Road just outside of The Fork? That was where her home place was. Her father was Thomas Terrell Carl who married Sally Morton and raised eleven children there. Many of the Carl relatives are buried in the Leiper’s Fork cemetery.

I then began to wonder about Annie Carl’s husband and where his background might lead. Surprise again! She was married to Robert Fred Alexander, the son of James M. Alexander. This family owned land in the Carter’s Creek area in the 19th district. One of the Alexander relatives was among some of the first settlers in this area. He donated the land that is now known as the Alexander Cemetery on Beechcroft Road. Many of the Alexander ancestor are buried there. 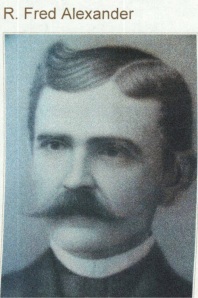 So, maybe there is something you have noticed by now…..my father, Carl Alexander Morris, was named after both of these families. And one more surprise fact: Annie Carl and Fred Alexander were married in Leiper’s Fork by THE David Lipscomb. 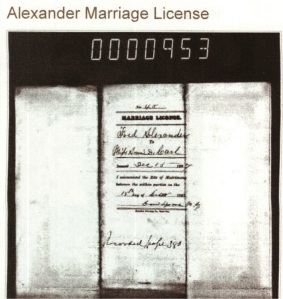 Since moving here my mother and father have passed away. They are now buried in our family cemetery in “Mullenville”. I have already met a gentleman in Leiper’s Fork that is a relative through the Carl side of the family and I have a feeling there are more Alexanders in the area that I would love to talk to about family ties.

If anyone has more information about either the Alexander or Carl families, please contact to Kerry via the “Participation” page, and that information will be forwarded to Mrs. Mullen.

AND THAT IS WHY I LOVE GENEALOGY!!

This story was written and submitted by Joyce Fazakerly Mullen.