Hilltown, named after the John Hill family who had 21 children, is a sweet community located within Santa Fe, Tennessee.   Hilltown was once home to Forrest Grove School  built in 1884. ‘Possum Trot’ and ‘Coon Trot’ were nicknames given to Forrest School at the time. It was located on Chestnut Ridge Road surrounded by dense woods.  The woods made it difficult for the kids to play a game of ball outside. The one room schoolhouse was for grades 1st through 8th. After the first frost, the school would close at 12 noon and the students would hunt for chestnuts, hickory nuts, and sometimes grapes. There was a large hollow beech tree that stood out front of the schoolhouse.  The kids placed their sack lunches inside the hollowed out area.  At one point, the tree caught fire, and fell blocking the entrance of the school.  Thankfully, the school didn’t catch fire as well. Forrest School closed in 1918.

General Stores Located Within The Community Of Hilltown

There was once a sawmill located in Hilltown along with 4 general stores.  The first store, owned by Colley and Eunice Hay ran a store from 1945-1960 at the intersection of Chestnut Ridge and Woolard Road.

The second general store was owned by Ruthie and Bob Stanfill located at the same intersection mentioned above. It has an old timey, crank-by-hand gas pump.  Later this store was moved to Santa Fe Pike and became known as Tug’s Place.

The third general store was owned by Pearlie Warren and daughter Emma Lou Johnson.  This store was located across the way from Tug’s Place in the 1970’s and 80’s. 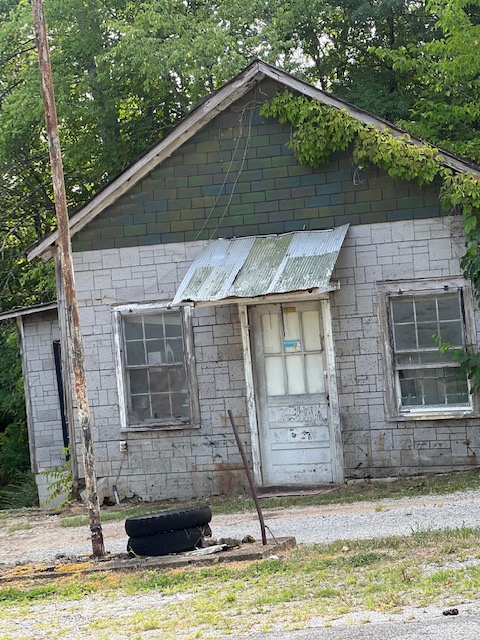 The fourth store was owned by Ed and Christine Givens is still located today on Fly Road near the Hilltown Road intersection is pictured above.

A molasses maker, midwife, and an old Camp Ground Springs for brush arbor meeting were held were also located within the Hilltown community.